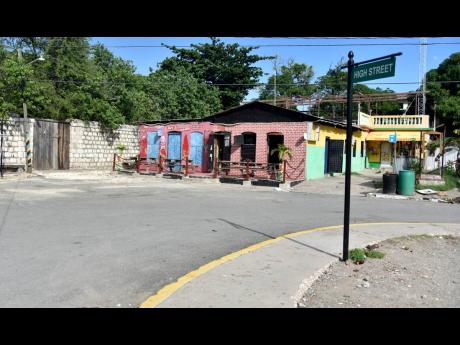 This section of Port Royal Square was the scene of Monday’s killing. Nardo Isaacs was reportedly run over by a car driven by a a man with whom he had an altercation.

Residents of Port Royal in Kingston have steadily worked to rebuild the reputation of the once great city by maintaining a near non-existent crime rate.

But Monday night that peace was broken when 41-year-old Narado Isaacs was killed during a fight with another resident. Persons said this type of violent act is unheard of in the quiet fishing community. Plumber Roy Brown said when he heard the news, he thought he was dreaming.

"I was sleeping at the time and my wife come in and told me that something happen outta street, somebody died. It surprising to me because those things don't happen in Port Royal so it just surprise me. But in a sense, me still never believe it when me hear it. Mi know me inna me sleep and thing and she wake me up, so me just go back to bed. And then when me get up now me hear seh is really a fact seh it happen. It very unfortunate but that's how it is," he said.

According to alleged eyewitnesses, Isaacs was in a fight with another man when the suspect tried to quell the altercation. After a few blows, Isaacs fell and moments later, the suspect reportedly mowed Isaacs down with a car before fleeing the scene.

Head of the Kingston Eastern Police Division Superintendent Tomielee Chambers told THE STAR that Port Royal is one of her most quiet station districts.

The suspect has not yet been apprehended.