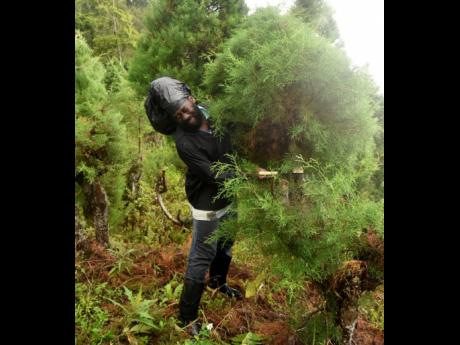 Farmer Alex Smith cuts down a pine tree from his farm in the hills of Penlyne Castle in St Thomas. He will be selling these this and other trees along Constant Spring Road in Half-Way Tree, St Andrew for the Christmas season. 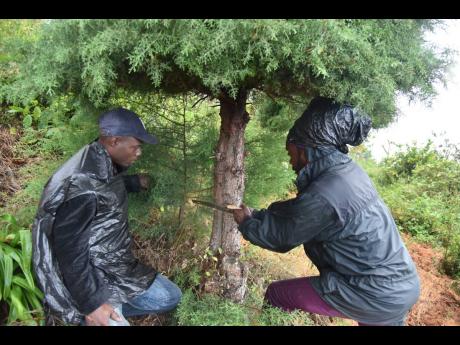 Farmers Ipal Smith (right) and Claude Willis attempt to cut this tree, one of the 10 they loaded into their vehicle for the sojourn into the Corporate Area. 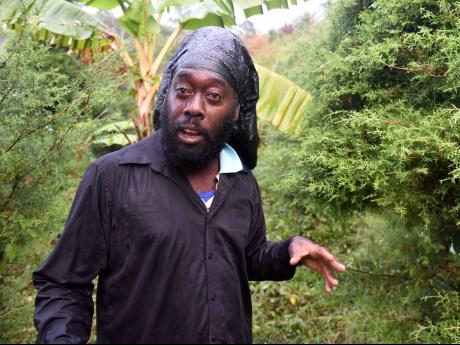 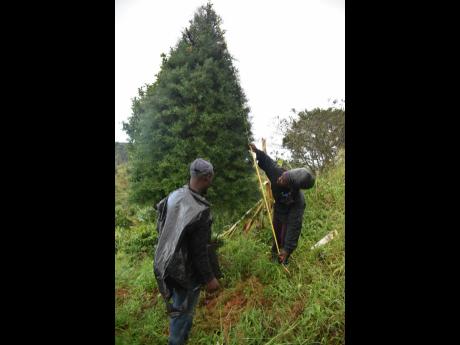 The farmers measure the tree to see which one suits a specified order from a potential buyer. 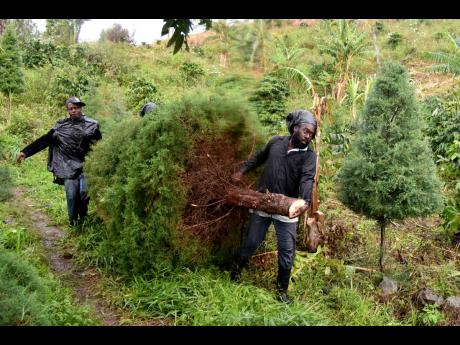 It’s hard work for Willis (left) and Smith as they carry this tree to waiting transport.
1
2
3
4
5

One often thinks about pulling the blanket closer whenever there is early morning rain or the temperature is ice cold, but for Christmas tree farmers of the Blue Mountains, that's often the weather they face when it's time to head out to work.

Though none of them are Santa Claus, Alex Smith, Ipal Smith and Claude Willis make an annual Christmas trip, braving the near freezing weather to bring good cheer to households islandwide with their trees. This December is no different as, for the past week and a half, Mother Nature has been dumping showers in their area. Hopping on to the back of a Land Rover driven by Alex, Claude uses a garbage bag to protect himself from the downpour, but within two minutes he was soaked. They exited the vehicle, seemingly oblivious to the water pouring from the sky.

"A just suh di ting set man. Is over a week the rain a fall, but we nah make it stop we. Sometimes we out here when it a fall harder than this," Alex said.

It was close to 7 a.m. and after several attempts, the news team decided to bravely face the frigid weather and follow the men down the muddy and slippery dirt track that leads to their four-acre pine tree farm. Wasting no time, the farmers began measuring and cutting their finest and roundest trees. Within another hour or so, they, along with other farmers, would journey along the rugged, treacherous roads that lead from the Blue Mountains to the plains of the Corporate Area to get sales.

A Christmas tree typically sells for $1,800 per foot and the average pine tree is about four feet long. It takes approximately three years for a tree to mature and the process includes transplanting the seedling from a pot to the earth. Not much grooming is done within the first year of planting, but once the tree turns two, Alex said he began trimming the branches every four months.

"If it's during the rainy season, then we will trim every three months because the trees love water. We continue to cut the spring, so instead of them growing out, they will grow in and then it will get round and form the shape," he said.

Seeing how soaked this reporter was, one of the men offered an umbrella for shelter and continued to cut and wrap the trees as if they were working in sunlight. For Alex, the rain and cold do not compare to the joy that they provide.

"The customers are the ones who give us the drive to push out because we know it brings a lot of joy to households. Even though we do the work and we make a little money from it, we still bring joy to even the younger kids. The children are the ones who motivate me to continue doing it over the years and come out even when rain a fall like now," Alex said.

There is hardly any rest for any of the vendors and farmers, Ipal explained, but they are not complaining.

"Every day we a go out and cut and sell until Christmas Day. Sometimes we don't leave the plaza until 10 p.m. and with the bad road, it takes us about two hours to go home, and then we get about three hours sleep and back at again the next day. A just suh di ting set. We do farming on a whole, so when it's not Christmas time, we have coffee. So we always have something doing. We also do cash crop as well," Ipal said.

The rain never eased, but the men still managed to cut, wrap and load about 10 trees in the back of the Land Rover. As the news team breathed a huge sigh of relief and dashed into the vehicle to warm our hands, one of the men laughed, before stating that they were not finished harvesting. The other farm is located further up in the hill, which meant stronger and colder winds. Ipal said a customer requested a 12-foot tree and that was their main prize for the morning. After locating the perfect pine tree, the tree men, despite slipping several times, managed to cut and wrap it and load it into the vehicle.

"It's not a easy road because everything is dirt, so it is very slippery. But a suh di ting set," Willis said.

With the hardest part of their job completed, the men jumped back into their vehicle, and stopped for a quick shower and change of clothes to take on the journey into Kingston.

Before leaving, THE WEEKEND STAR enquired what will become of the unsold trees, but Alex said they have it all figured out.

"Back in the day I use to cut like 10 trees and I would sell like six or seven, and if it doesn't sell, I would try to sell it the following day. If it doesn't sell on then on the third day, I would have to dump it. What I have learn is that I should learn with a figure. So I would carry five or six on a regular day, and on the weekend, which is busier, I would increase the amount to about 15. So this way I don't have much to throw away," he said.