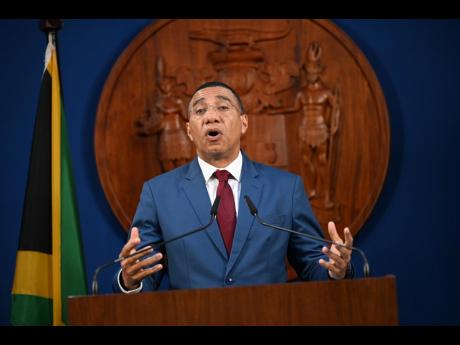 Prime Minister Andrew Holness is advising the public to be wary of “political activists” who place greater focus on politics, and less on saving lives.

He was speaking at this morning’s announcement of Public States of Emergency (SOEs), which have been declared in St Catherine, St Ann, Clarendon, Kingston and St Andrew, St James, Westmoreland and Hanover.

“Since the end of the last SOEs, we have seen, unfortunately, an increase in criminal activities in these areas, and indeed a threat to property, and in some instances public disorder,” Holness said.

On November 25, the Government's bid to secure an extension of the then imposed SOEs was blocked in the Senate by the Opposition.

At least one Opposition vote was needed for the measure to be extended, however, Senators voted along party lines.

The prime minister argued that emergency powers are an important part of any society, and that the Government is using the SOEs in an appropriate manner.

“It was my political organisation that suffered under the misuse (of SOEs) by the very administration that is now pretending as if they have somehow recently discovered a passion for constitutional and human rights matters,” Holness said.