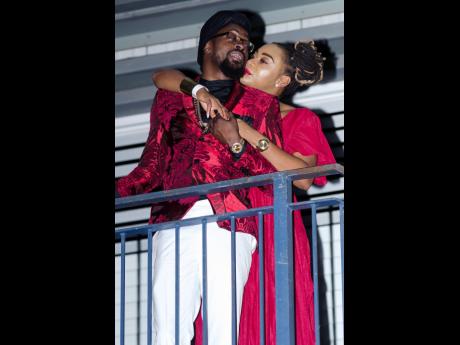 Beenie Man's partner, Krystal Tomlinson, wants the artiste's fans to know that he is alive and well. This after news began circulating that the King of Dancehall was hospitalised with gunshot wounds and is fighting for his life.

"Beenie Man was not shot, stabbed, harmed, or otherwise disrespected. There have been no attempts on his life. He arrived from Trinidad from Monday and has been resting since then. He's fine, healthy and well," she said.

The story currently circulating on the Internet says the entertainer was shot at least twice by unknown assailants as he was driving out of his home.

The story claims the artiste was rushed to the hospital and that doctors said he was in 'very critical condition'.

Speaking with THE STAR on the 'fake news', Tomlinson explained that it is not strange for persons to start rumours involving the entertainer.

"These kinds of rumours aren't new. Whenever Moses Davis (the artiste given name) is caught in any kind of conversation, there are websites that will start something just for clicks and likes. It's easy for people to guarantee themselves clicks when his name is the topic of discussion," she said.

Tomlinson encouraged persons to fact check their news before disseminating it on social media.

She warned that there are several websites set up just to promote fake news and explained that too many fall victim to their trap because they do not do their own research.

"Sometimes, nobody is interested in fact checking before they share and that's why these things usually get so much attention," she said. "Most times these sites aren't even sites that people recognise. People must pay attention to where they get their news. Beenie Man is unbothered by the reports but what if it were someone else and they weren't equipped to deal with the attention?"

The 'Doctor' was also recently involved in a brief social media spat with fellow entertainer Popcaan.

Popcaan called out Beenie Man based on some things the artiste said in a video circulating on social media.

Popcaan took the comments as a sign of disrespect and made his grouse public.

Beenie Man had to quickly clear the air about said video, explaining that the bit Popcaan saw did not tell the full story and did not reflect what was actually being said.

He explained that the video was cut and that he never disrespected his colleague in any way, shape or form.

The article reporting Beenie's injuries mentions the Popcaan saga which could imply that the 'shooting' was somehow related.